In India there were appearance of great Ranies for so many times through all over Her territory. Among them  very famous are 1. JNASI KI RANI-LAKSHMIBAI, 2.AHALYABAI HOLKAR-THE GREAT MAHARANI,3.RANI RASMONI OF BENGAL,4. RANI VABANI OF BENGAL, 5.SULTANA  RIZIA etc.
Every body is eminent and memorable for each of their contributions.
Maharani Ahalyabai is specially important as because during her  'Kingship' she carried out so many humanitarian works. And the revival of Sanatan sacred places which are  being worshiped today from times immemorial happened during Her period.
To the Sadhu’s world SHE WAS A SAINT. To the common people SHE WAS A MOTHER.To the rulers SHE WAS AN EFFICIENT RULER.

Today whatever we see as a tourist or pilgrimage in different  ancient places of India, almost all are reconstructed by THE GREAT AHALYABAI.

Her life span was 70 years. We do remember , in India The battle of Palasi happened in 1757. And the 'Sipahi Bidroha' was in1857. 'Palasi' means around the time of British invasion in India. 'Sipahi  Revolt ' means the important revolt against their ruling from India.
Ahalyabai’s period was at the time of British invasion. So her dynasty was under the close contact of the British. And according them Her image was 'Great'.
Till date only few rulers has so complete image; SRI SRI RAMACHANDRAJI, SRI VIKRAMADITYA, CHANDRAGUPTA MOURYA, THE GREAT ASHOKA ,THE GREAT AQBBUR and RANI HOLKAR AHALYABAI are only the names adored in this category.

So she has really become immortal.
In Indore  the University, the Airport have been established by Her name. In West Bengal the road 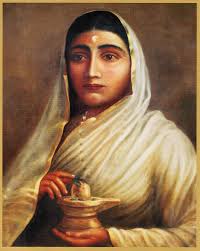 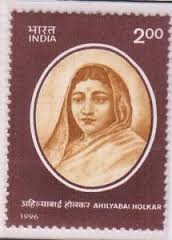 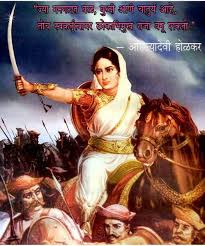 from Howrah to Benaras  through Arambag,Joyrambati, Kotulpur , Bankura, Purulia, Patna ,Benaras is renamed from BENARAS ROAD TO AHALYABAI ROAD. Through which DELHI  ALSO COULD BE REACHED. AND  this is the shortest route by car from Kolkata to Benaras /Delhi. Another road is GT ROAD.

But the point of despair is ,this great facts even being a doctor I have come to know  very latter. In child hood and student hood we did not read this information.

This type of encouraging topics should be incorporated in study books. So that students become acquainted with the contributions of GREAT INDIAN LADIES.