Review Of Education System In Perspective To Modern Science.

INDOLOGY- IA A SUBJECT.
BUT HERE A SUBJECT FOR HEAVENLY EARTH IN COMING DAYS.
PLEASE BECOME A FOLLOWER & ADVICE OTHERS TO FOLLOW.

In my early childhood I read about Galileo & Copernicus. They confronted a strong opposition for their views. One sentenced to death for his opinion : the Earth moves round the Sun.
Afterwards in my latter life when I went into the Vedas I found that Rishis are chanting that the Earth [gajat>one who moves] moves round the the Sun. They sings :all the world is one. They chant every thing ,every man, every creature is one.
The Bible is much younger than The Vedas. And it is clear though  one single civilization started around the Urals, latter one branch became separated & developed with different newer theories.
On the other hand another branch remained the same & nurtured with the ancient philosophy, arts, cultures & science.
Afterwards when different intermixing & acculturation happened with a lots of wars & invasions the modern branch gave its numbers of newer developed things.
Today the science has been reached in such a level wherefrom everybody can connect each other in the world & a quest is going on for the ancient heritages of the mankind , not only for a country or race.
With this background we have to review our all the education pattern keeping the whole world & this universe in priority not the country or a small sector to keep the balance of ecosystem & to create a peaceful world.
We know the child’s brain is unique. From the second years of age child starts to copy beautifully [without realizing the meaning. Realization comes in latter ages.] From this period if, something is  taught the brain will copy this. Moreover,  if culture continues this will remain. In addition, when realization will come the matter will be very easy to them. This is true for all newer things & approach. In our matured brain which is difficult to grasp.
e.g. ‘computer operation’- in comparison to younger brain & mature brain at when first the computer were developed.
Till date some of the medieval age’s approaches  is still present in our education system.
To start a complete pattern of approach for the future  generation  from  the universal stand point we have to reset our all the subjects gradually keeping the central philosophy in everywhere .And that is….. Everything is one &… has been originated from the one. And is….. controlling as one in a larger sphere.
First of all we have  to think about today’s
Geography subject.
Geography is still  today taught to the child on country basis. We teach the Earth, the Solar system, the
lands ,state wise, country wise; its nature, food, production etc. everything.
And gradually we give the priority to our country first, then the world.
In newer system our concentration should be first to the world .
Modern science will play the major role here. With three dimensional models, internet, with the help of different Observatory science [e.g. NASA] we have to show to this young brain where we are, what we are & the time & spatial relation of the Earth-Sun –Moon. Their orbits ,their rotation, different sky, diurnal variation. Seasonal variation & their effects on environment, plants, food, animals , insects, their behaviors, built etc.
Virtual science & models also have a great role here. Afterwards the land & country will come.
[To think about the Geography always in a brain - a shape of a complete Man-Earth –Solar system in space that rotate & seen in a whole year
{a space in respect to a particular time(day/night) & season(staring pattern, climate)},
should come first .]_
This type of approach is always followed by all the Yogis & Rishis in ,Asia & Abroad.
In fact ,when we individually stand under the wide sky, & we do feel or try to feel the relation with we individual & the earth, sphere, the Sun, the Moon & the sky,then country does not come. And there is no role of a country in thinking of an oneness with the universe for an individual. And is the greater fact than our own nationality for an individual.
And this is followed most importantly by  all the Yogis & Rishis in ,Asia & Abroad always.
I think this will create a different impacts on child’s brain. They will start to think themselves as a part of whole universe first ,then the country will come.
This is very important for the future generation to  restore the of peace in the world.
Because from universal standpoint there are many issues where the narrower interest of a caste, colors, race & a group will be much unimportant. Many struggles, murders, wars will be controlled  in future generation  with this type of child’s brain getup which is difficult to adopt to this present generation.
Country’s or individual’s interest depends on another important thing is ‘Economy’. 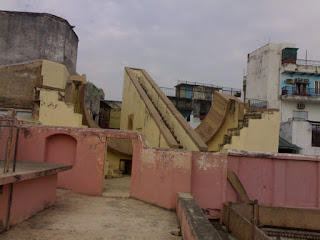 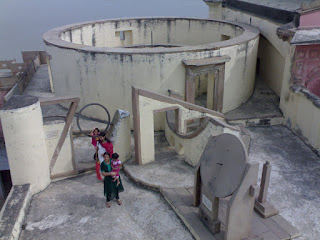 first two are the photos of MANMANDIR[astronomical analysis site in VARANASI(BENARAS).last is the famous 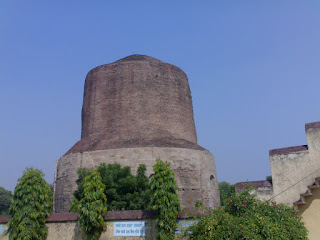 SACHI STUP a place is famous for MAHAVIR JAIN & LORD BUDDHA. near VENARAS(BARANASI).at SARNATH.where SRI BUDDHA preached first to HIS deciples after becoming SRI BHAGAWAN BUDDHA.]
This is also to watch how they will tackle this matter in future,- when brain will give first importance to the vastness, to the world & to the universe.
Every country if thinks about this type of strategy, then the world will be a better world in future.
- April 19, 2011 No comments: Links to this post